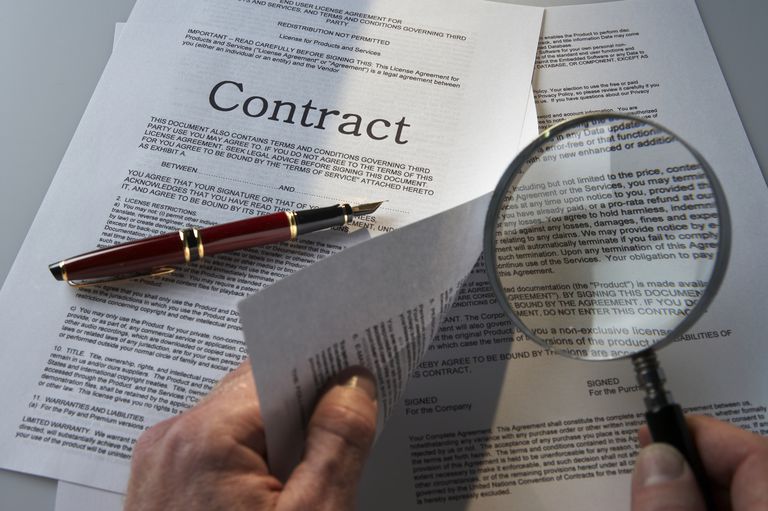 People can be presented with a contract for a variety of reasons across a wide range of settings.  Whether it be a prenuptial agreement, selling agreement or business partnership, no two contracts are the same.  However, all contracts will contain parts that you do not understand.  That is why consulting an attorney is helpful.  When going through a contract, consider the tips in the article below.

5 Tips for Reading a Business Contract

How to Read a Contract to Avoid Problems Later

You are handed a business contract and told, “Sign here!” Don’t do it! Read the contract carefully, following these guidelines, to avoid problems later.

Whether it is a real estate contract, business sale agreement, employment contract, or contract between you and a customer or vendor, you can use these guidelines to avoid problems.

Much difficulty in contracts comes from incomplete or missing definitions. In one case, an an unclear definition of “overhead“ in the calculation of payment to an independent contractor caused a lawsuit.

Assumptions are really the most difficult part of any contract. You read a contract that includes a section on how the value of property is determined. Even if you think you know what has been written, ask for an example, or ask a question like, “Just to clarify, I think this means X. What do you think it means?”

Don’t worry about appearing dumb or difficult; better to clarify now than find out later you and the other party were thinking of two different meanings.

Ask “What is Missing?”

This part is tricky; it is difficult to know what should be in a contract but isn’t. In employment contracts, for example, there is a section describing how the employer can terminate the contract and what notice must be given.

But sometimes there is no language about how an employee can terminate the contract and what notice must be given. For example, some contracts have no effective date or which do not completely identify the parties.

Take a look at this Employment Contract Terms article for an example of the sections in a typical contract.

If you don’t see something that should be in the contract, make sure it gets in.

Read “Boilerplate” Carefully and Don’t Be Afraid to Change It

Read those long boilerplate sections, even if your eyes cross and you start to nod off. Ask that the section be simplified or that it be shortened. Don’t hesitate to make changes that clarify or which are to your advantage.

Finally, Get a Second Opinion

If you are reading a contract prepared by the other party, don’t rely on yourself or other non-attorneys to read the contract and find all the problems. Take it to an attorney who knows the law in your state.

Don’t let the attorney re-write it (they love to do that!), just to give you an opinion on what needs to be changed. Then take the list of changes back to the table and negotiate; let the other party pay for the changes.

Following these guidelines to reading contracts may not prevent you from making a mistake and signing a contract that will cause you problems, but it can eliminate some of the most obvious problems and provide clarification, which is always a good thing.